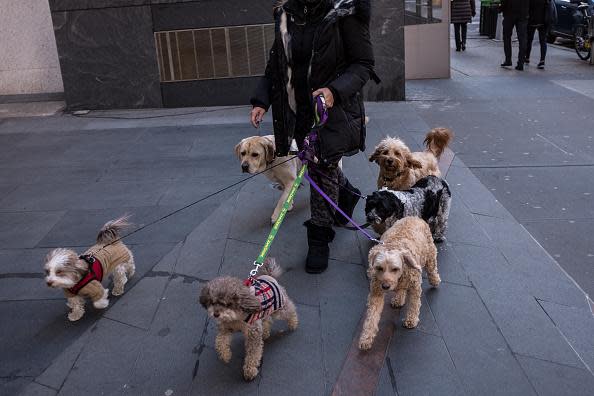 A four-year-old boy in El Paso, Texas was mauled to death by his family dogs Thursday, police said.

Police identified the boy as Jacob Brooks, and said the incident happened around 7:30 p.m. when he was playing with the four family dogs in the backyard of his house.

Officers who had been sent to the the Del Valle area neighborhood responding to an unknown problem found Brooks’ body in the backyard.

Police said the boy’s mother, who was not identified, had left him with the dogs in an enclosed trampoline in the backyard. They said it seemed the dogs had mauled him to death while playing, reports said.

Brooks’ mother was taken to the hospital on protective medical hold. No charges were filed as of Friday afternoon, but police said they are investigating the case.

After the incident, all the dogs, of different sizes and breeds, were taken into Animal Service custody. It is still unclear what made the dogs react violently. Police did not identify the breeds of the dogs.

The neighbours said the boy was seen playing in the area quite often, and his family owned as many as 10 dogs, including aggresive breeds like Pit bulls and German Shepherds, reports said.

This is not the first time that such an incident has been reported in the U.S. In Aug. 2016, a Colorado woman was killed in a dog attack at home. Her sons sustained injuries in the attack.

Susan Shawl and her son were in their home when they were attacked by their two dogs, which were described as “a terrier-pit bull mix.”  It was later confirmed the family was issued “warning notices” for the aggressive behavior of their dogs.

However, in the latest El Paso attack, it is still not clear if any such warning was issued to the family.

Unnatural behavior of dogs in not uncommon in the country. A report by the American Society of for Prevention of Cruelty of Animals claims that around 10 percent of owners in the country abandon or give away their dogs due to behavioral issues.