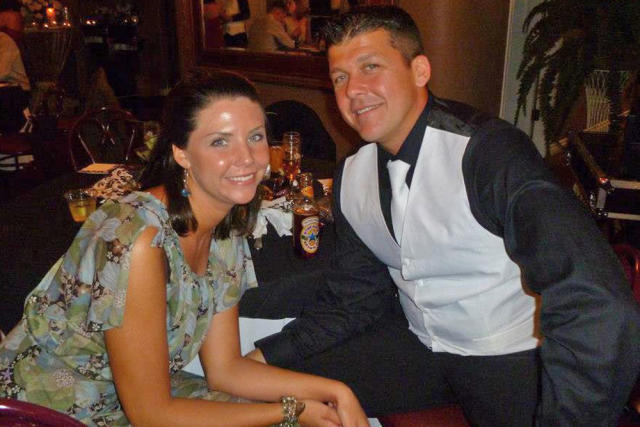 An Orlando man allegedly tried to cover up his wife’s murder by posing as her and posting messages on her Facebook page to make it look like she was still alive, PEOPLE confirms.

After allegedly strangling 30-year-old wife Kristen McShane, George Joseph McShane, 42, posted the messages so family and friends would not become alarmed when the mother-of-two failed to return their calls or text messages, according to an arrest report obtained by PEOPLE.

On Jan. 7, George McShane, who lists himself as “single” on his Facebook page, allegedly wrote on his wife’s wall: “I can’t believe I dropped my phone in the toilet. I’m such an idiot. Message me here, til I can get it fixed.”

He told detectives he also sent messages to her family and friends to convince them that she was still alive, according to the report.

On Tuesday, three days after the posts, police arrested him on charges of domestic battery by strangulation and second-degree murder, according to the arrest report.

He is being held in the Orange County Jail without bail, according to a court spokesman. It is unclear whether he has hired an attorney.

On Tuesday at 12:49 p.m., police responded to an “unknown trouble” call at the couple’s apartment and spoke to a relative by marriage who said her husband had visited the McShanes’ home earlier that day and thought Kristen McShane was dead and that George McShane “was going to kill himself,” the report states.

•Police found George McShane in his 2005 Hyundai Santa Fe in the garage with the engine running and believed he was trying to kill himself, according to the report.

After officers removed him from the garage, they found the body of Kristen McShane in bed in the master bedroom, covered with a comforter, according to the report.

The report alleges George McShane told police he got into an argument with Kristen McShane on Saturday afternoon.

“During the course of the argument, George stated he lost his temper and jumped on Kristen, using his two hands to choke her until he realized she was dead,” the report states.

Kristen’s family and friends took to Facebook to remember a woman they described as upbeat, sunny and “a beautiful person.”

She leaves behind two children: a six-year-old girl and a four-year-old son, who has Cystic Fibrosis, according to a friend who spoke to PEOPLE on the condition of anonymity.

“We are all worried about who is going to take care of the kids,” the friend says.

Previous Post: Utah Mom Allegedly Locked 12-Year-Old Son in Bathroom For Over a Year and Starved Him: ‘Like a Horror Movie’
Next Post: White Teenager Raises $15K for College, Says Parents Cut Her Off Over Black Boyfriend