By Lindsey Bever August 30 at 6:30 AM
Three former Marines were sentenced August 24 for attacking a man who had an affair with a Marine’s wife while he was deployed. The men wore hockey masks to conceal their identities and beat the victim so badly his kidneys failed. (
Norman Early III pulled up to the Southern California house one night in September 2015 and sent a Snapchat message to the woman he went there to see, saying he was parked a short distance away.

The two, who had known each other for several years, had crossed the line between friendship and flirtation while her husband was serving overseas.

The woman responded, “Come in the door is unlocked.”

[A Marine fights to prove he’s innocent of sexual misconduct. Then a lost cellphone is found]

Minutes after midnight on Sept. 20, 2015, Early walked into the modest corner house with a white iron fence and concrete pillars.

It was her husband, however, who was using her cellphone to talk to him.

Almost simultaneously, Early later told police, a car alarm started to scream and he saw a man running toward him, according to a criminal complaint filed in the case.

He slammed the front door, locked it and turned around, and there stood three Marines.

The men, wearing Jason Voorhees-style hockey masks, started to punch, kick and push him to the ground, according to the court documents.

Early later told police that he struggled to fight but that his assailants pinned him down on his stomach and zip-tied his wrists, then continued to punch and kick him in his face and body. He said he tried to shout but they stuffed a sock into his mouth and sealed it with tape. He said they wrapped a belt around his neck so tightly he almost passed out.

The three men had one question: “Did you know she was married?”

“She told me she was separated and getting a divorce,” Early said he told the men, according to the court documents.

Early told them that he “loved” the woman and that although he had never had sex with her, the two had been romantically involved.

He said they taunted him, shouting, “You think you are better than us,” and held him captive for about 30 minutes.

One of the men walked to Early’s car where he kept a BB gun, he said. He said the men then pointed an object that felt like the barrel of a gun to his head and told him, “We are going to kill you with your own gun.”

Court records state that the men stole Early’s wallet and cellphone, warned him not to go to police and then let him leave, but followed him to the highway. Early got off the highway, pulled into a 7-Eleven and pushed his vehicle’s OnStar button to request emergency help.

Lance Cpl. Sergio Medina, stationed at the Marine base in Twentynine Palms, Calif., had discovered that his wife, Diana Reyes, had kissed Early while Medina was deployed overseas, according to court records.

So while he was on leave last year, he called on his Marine buddies and apparently decided to teach Early a lesson.

Authorities said Early sustained an orbital fracture and that his eye was bruised and swollen shut. They also said he had numerous contusions to his head and body and marks around his neck and his wrists.

During his recovery, doctors said, his kidneys failed and he was put on dialysis, according to ABC affiliate KERO.

“I knew what my fate was,” Early told the court, according to the Bakersfield Californian. “I was going to be murdered.” 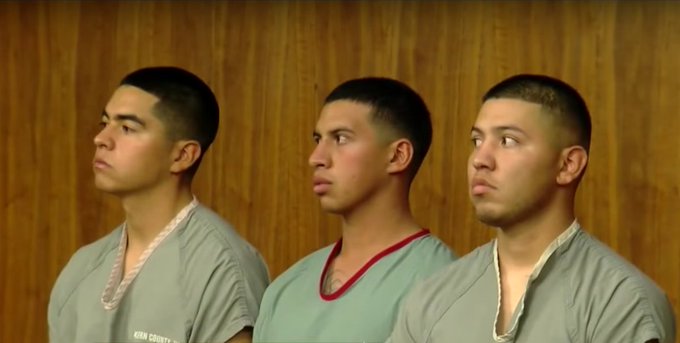 Twenty-two-year-old Medina and his friends Lance Cpl. Rodrigo Sanchez and Lance Cpl. Leonardo Ortiz, both 21, were sentenced Wednesday for robbery in concert — Medina receiving a six-year term and Sanchez and Ortiz a three-year term each.

Officials said the men have been discharged from the Marine Corps.

[Male on male sexual assault in the military: Overlooked and hard to fix, investigation finds]

The Bakersfield Californian reported that the men were initially charged with several felonies, including attempted murder and kidnapping and torture. But, it said, the attempted-murder and kidnapping charges were dismissed during the preliminary hearing, and the prosecutor in the case worried he would not be able to get an entire jury to convict the men of torture, which carries a maximum sentence of life in prison.

At the same time, the defense worried the jury might do just that. Over the summer, lawyers accepted a plea deal for first-degree robbery.

Prosecutor Brad Taconi said the men received a sentence similar to the one he suspects they would have gotten had the case gone to trial.

“It was a stupid decision by the three Marines,” he told The Washington Post last week about the beating. “They had everything going for them, and to let something like this derail them from their career — to put Mr. Early through this for no gain — was just stupid.”

But Medina’s attorney, H.A. Sala, said that Early had merely been “punched” by an angry husband with help from buddies who had his back.

“From one perspective, this man got what was coming to him,” Sala told The Post last week, referring to Early. “He knew he was having an affair with the wife of a Marine who was deployed fighting for his country oversees.”

It’s no secret that military marriages can be hard, but Pentagon statistics show that for that past six years, the divorce rate has been declining, hitting an even 3 percent in 2015,according to Military.com.

The civilian divorce rate is 3.2 per 1,000 people, according to recent figures from the Centers for Disease Control and Prevention.

[How my husband’s deployment has strengthened our marriage]

Early told police he met Reyes in 2012 and that the two had seen each other many times since then but had not had sexual intercourse, according to court documents.

The defense claimed Reyes had tried to end it but that Early continued to pursue her; she then told her husband about it and he arranged a meeting under false pretenses, according to the Bakersfield Californian.

Medina admitted to police that he posed as his wife on Snapchat to lure Early to the home, where he restrained Early and questioned him about the affair.

Reyes told police that Medina asked her to wait in a back bedroom, where she said she listened to Early’s beating, according to the records.

Sanchez’s attorney, Kyle Humphrey, told the Bakersfield Californian that although the three men were in the wrong, Early was not without blame.

“You don’t want to be sniffing around another man’s wife,” he said.

Attorney Richard Middlebrook, who represented Ortiz, told the newspaper that it was never the men’s intention to cause Early any real or lasting harm, but that the former Marines’ training kicked in during the interrogation.

“They come back from seeing some pretty crappy things,” Middlebrook said, “and there’s no process to get them accustomed to what’s normal and what’s not any longer.”

The prosecutor said Early has since returned home to his family in California and is working to finish school so that he can join the military.

An earlier version of this story incorrectly stated the civilian divorce rate. It has been updated.