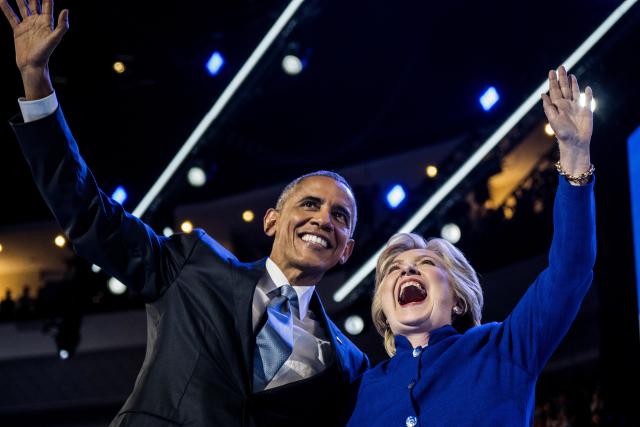 President Obama’s remarks Wednesday night were as forward-looking as they were nostalgic. Twelve years after introducing himself to the nation at the Democratic convention in Boston, he came to Philadelphia to make the case for Hillary Clinton, presenting his former Secretary of State the torchbearer of his legacy.

“Hillary Clinton is that woman in the arena. She’s been there for us – even if we haven’t always noticed,” Obama said, calling her the most qualified person to ever seek the office. “And if you’re serious about our democracy, you can’t afford to stay home just because she might not align with you on every issue.”

Americans, Obama said from the Wells Fargo Arena, will face an important choice in the coming months, a choice that goes beyond politics. “What we heard in Cleveland last week wasn’t particularly Republican—and it sure wasn’t conservative,” he said. “What we heard was a deeply pessimistic vision of a country where we turn against each other, and turn away from the rest of the world.”

Before he spoke, Vice President Joe Biden hit similar themes, describing Trump as a man whose candidacy alone is a direct rebuke of everything the Obama administration represents. “Threats are too great and times are too uncertain” to elect Trump, he said.

“His cynicism is unbounded,” Biden continued. “He’s trying to tell us that he cares about the middle class? Give me a break. That’s a bunch of malarkey.”

Obama picked up on the theme, saying that people are baffled by the current election, given Trump’s policy positions and rapid rise. He described Clinton as a person who can finish the job against the Islamic State, the terror network he once called the “JV team” that has inspired attacks carried out by lone-wolves in the U.S., France, and Germany. “She has the judgment, the experience, and the temperament to meet the threat from terrorism. It’s not new to her,” he said. “ I know Hillary won’t relent until ISIL is destroyed. She’ll finish the job—and she’ll do it without resorting to torture, or banning entire religions from entering our country.”

The president’s speech was not immune. A Code Pink protester waved a bright pink sign during the president’s remarks and intermittent cries broke through the droning cheers that swelled inside of the arena. Julianne Malveaux, a liberal commentator and the former president of Bennett College, dismissed the days’ protests as typical for a Democratic event. “We’re Democrats,” she said after the speech. “When have we not had dissent?”

And as much as the speech was about Clinton, it was also about the president and the legacy he’s built over the past eight years. In a video before his speech, an ominous-sounding Bryan Cranston narrated a dramatized timeline of the key moments of the president’s two terms, from the economic crisis to the Affordable Care Act to the Osama Bin Laden raid to the failed attempts to usher through gun reforms in Congress. He reminded the crowd that 12 years ago, then-Senate candidate Obama was “filled with faith” as he addressed the Democratic National Convention in Boston.

In his emotional close, the president credited his optimism to the spirit of the American people whom he called on to pass the baton to Clinton.
“You’re who I was talking about twelve years ago, when I talked about hope,” Obama said. “Time and again, you’ve picked me up. I hope, sometimes, I picked you up, too. Tonight, I ask you to do for Hillary Clinton what you did for me.”

As the crowd erupted at the close of Obama’s speech and Stevie Wonder’s “Signed Sealed and Delivered” blared on the speakers, the crowd did for Clinton that they did for him, filling the arena with a deafening roar. They cheered as the two walked arm-in-arm across the convention stage.

Taylor Harrell, a millennial delegate from Detroit, didn’t support Clinton in the primary, like many 23-year-olds, she was pulling for Sanders. On her way to charge her phone at a station near the arena said the president’s speech was what Americans needed to hear. “I don’t think Hillary is a terrible candidate. I don’t even think she’s a bad candidate,” Harrell said. “She’s the right woman for the moment.”