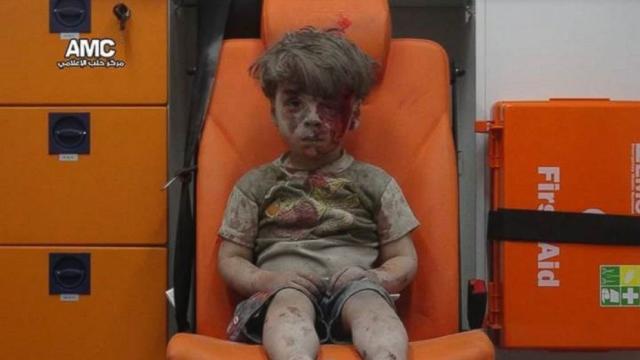 The 5-year-old boy from Aleppo couldn’t remember what happened.

He was covered in dust and bleeding from the head but didn’t know exactly why, according to the doctor who treated him.

The boy’s name is Omran Daqneesh, and his photo has been shared thousands of times on social media.

“Omran was scared and dazed at the same time. He wasn’t crying at all.t seemed like he had been asleep when it happened,” Mohammad, a surgeon in Aleppo who treated Omran, told ABC News.

Omran was rescued from a destroyed building in the besieged city’s Qaterji neighborhood after an airstrike. Mohammad, who asked ABC News not to publish his last name out of safety concerns, said Omran arrived at the hospital at around 9:15 p.m. local time Wednesday.

Haunting Image of Syrian Boy Rescued From Aleppo Rubble
Photo of Wounded Child Captures Horror of Aleppo Siege
“He was very lucky. He only had a simple wound in the scalp. We cleaned and stitched the wound and cleaned his face and clothes. There was no brain damage, and he was discharged after two hours,” Mohammad said.

Abo Rajab, a nurse who treated Omran, told ABC News that “Omran looked very, very shocked and frightened. In the beginning, he didn’t speak at all. But after his treatment, he started crying and yelling, “father, mother.'”

He continued, “His parents were very, very affected and scared for their son and crying. But we comforted them and told them that the wound was superficial. But he wasn’t speaking so it seemed like his condition was very serious. It seemed like he was unconscious and like the wound had affected his brain. But it turned out that he was fine.”

Eight residents from Omran’s neighborhood were sent for treatment at the hospital, including four other children, according to doctor Mohammad. At another hospital, one child, a woman and an elderly man died from the attack, he said.

“Many children are killed in this war when residential neighborhoods are attacked and they are at home or playing in the street,” he said, adding that 12 children under the age of 15 were injured after attacks on the city Wednesday.

“There are hundreds and thousands of stories like Omran’s,” he continued. “Omran was lucky. Other children are dead or paralyzed, and their stories didn’t reach the world.”

Mohammad said that repeated attacks on hospitals and lack of specialist doctors are some of the problems health workers face. He said he is one of only 15 surgeons left in Aleppo and that his hospital has been targeted more than 10 times.

Three to six wounded children arrive at the hospital every day, he noted.

“Today there was an attack in another neighborhood in Aleppo. Around 10 died, and 40 were wounded. One child died of a head injury after losing too much blood,” he said. “As doctors, our hearts are full of compassion when we see wounded children. Children are innocent and should be far away from everything related to war.”

The ongoing conflict in Syria has caused the largest humanitarian crisis since World War II, with more than 8 million children in danger, according to UNICEF.

Previous Post: Kim Jong-un ‘orders execution’ of those who failed to prevent London-based diplomat’s defection
Next Post: Ethiopia doesn’t want you to know these things are happening in the country